SSi’s CEO and President Jeff Philipp is the son of Sieg Philipp, who moved to Canada from East Germany in 1956. In 1962 he settled in Fort Providence, NWT. In 1963 he met and married Memoree, their adventure in both family and business would forever change the landscape of this small indigenous community that they had fallen in love with.

SSi is a family owned company which began in the small Indigenous community of Ft. Providence, NWT. SSi is named after the family business.
The Snowshoe Inn ~ Est. 1965, which is still running strong.

1980 – A Young Jeff Philipp
A young Jeff Philipp was developing a passion for computers. Always on the lookout for the latest and fastest models, he became the go-to guy in Fort Providence, NWT. And started making connections in the world of computers and technology

1990 – SSi Micro was born. Aptly named with a nod to the family business

Undeterred, Jeff flew to the Gateway head office in Iowa to meet with the president Ted Waite whom he convinced to make SSi Micro, Northern Canada’s “international Gateway distributor”.

SSi built its first satellite network connecting the five communities of the Kitikmeot region of western Nunavut. It was a complicated challenge, and SSi’s first foray into satellite technology. A year later SSi links Sakku Corp.’s existing Kivalliq satellite network to SSi’s network. A communications success for SSi and the North!

Local Training was necessary to train Community Service Providers (CSPs) to deal with customers and resolve potential problems. All students passed the course. Most were Inuit. 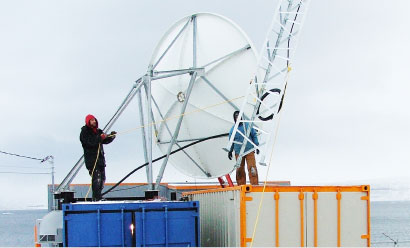 This new “mesh” satellite network was the first of its kind in Canada and fifth in the world, winning SSi the Next Generation Solution Award at the Canadian Information Productivity Awards (CIPA) in 2000.

2001 – Satellite in Ottawa was established

2003-2004
Caring Internationally
2005
SSi Qiniq is Launched
2006
Broadband Internet for the North
2009
Robust Connectivity for the Government
2011
A new SSi office in Ottawa!
2013
SSi partners with Cisco Canada and Connected North 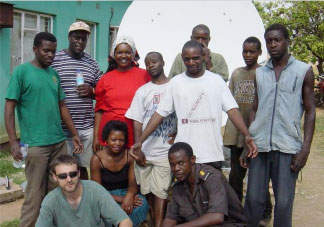 Qiniq (Inuktitut word for “search”) was the first broadband network to serve all 25 Nunavut communities. The QINIQ service was so successful that it doubled Industry Canada’s 5-year projection of 2000 subscribers in the first 9 months. Partnership agreements with the Government of Canada have continued to support the growing uptake of QINIQ services by Nunavummiut.

2006 – Broadband Internet for the North

SSi launched the Airware network in 30 Northwest Territories communities, bringing broadband internet to most residents for the first time ever.

2009 – Robust Connectivity for the Government

SSi was selected by the Government of Nunavut to design, deploy, maintain and operate its Wide Area Network, ensuring robust connectivity for all government departments. In twelve short years, SSi had firmly established itself as a leader in the satellite broadband market.

This partnership allowed the first ever delivery of 2-way video conferencing science sessions into northern classrooms. A giant leap for Northern education and healthcare. SSi donated satellite bandwidth to make this project possible.

2015-2018 – 4G-LTE SSi undertook a major upgrade to the Qiniq network in Nunavut, investing $75 million to deploy state-of-the-art 4G-LTE and 2G-GSM broadband wireless technologies in all 25 communities.

SSi made communications history by delivering high-speed internet aboard the Canada C3 Expedition vessel as it sailed across the Arctic, enabling vital communications through the sharing of data, videos and live broadcasts to millions of Canadians.

SSi undertook a major upgrade to the Qiniq network in Nunavut, investing $75 million to deploy state-of-the-art 4G-LTE and 2G-GSM broadband wireless technologies in all 25 communities. millions of Canadians.

Passionate about solving the issues of high heating and energy costs in remote and northern communities, SSiE is a natural fit. Remember, the Snowshoe group of businesses have been off-grid since 1973.

Click on any of these images to read the section